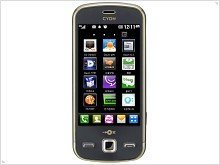 Mobile phone LG LG9400 Maxx is made in monoblock form factor besklaviaturnogo, under the touch screen is an optical joystick. The device has a processor Qualcomm Snapdragon QSD8650 to 1 GHz, working in a standard CDMA2000 1x and EVDO Rev 0/A/B. The capacity of this processor is sufficient for the calculation of 22 million triangles per second and 133 million 3D-pixels per second.

Specifications phone LG LG9400 Maxx as follows: 3.5-inch touchscreen display with a resolution WVGA, which supports multi-touch, optical joystick, 5-megapixel camera that can shoot video with a resolution of 1280x720 pixels at 30 frames per second, the module Wi-Fi, GPS-receiver, TV tuner that works in the standard T-DMB, and 3,5-mm jack for headphones.Built-in battery is 1500 mAh.

Sales tachfon LG LG9400 Maxx will begin soon, but its price is not yet known.