Mobile phone Samsung SGH-E490 used to be called a dream for every woman, his popularity and now is still very high, even despite the abundance of sensory and stylish phones. Samsung E490 - the most popular phone, which ranks first in the ranking , this means that visitors to our site often browse this particular model. Therefore, especially for our favorite visitors offer a complete overview of mobile phone Samsung E490, as well as well-designed pictures and videos of this machine. 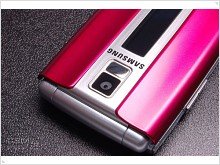 Not counting the bright removable panels, phone Samsung E490 looks quite modest, a sense of security it does not matter - plastic thin and creaks slightly when lightly pressed. In everyday use, however, this almost no attention, deficits are seen only with careful examination, however, opening the terminal to change the SIM-card, you must be extremely careful.
The phone's dimensions do not differ compact, they are 94h49 mm in thickness, small - just over 15 mm. Samsung has continued to "play" with the elegance of their vehicles, which qualitatively distinguishes them from products of other manufacturers. Like other similar form of the model, this device sits in your hand without causing discomfort from zauvelichennoy width, small thickness and does not create problems - on the contrary, for young hands and thin fingers, she fits perfectly. Moreover, the terminal almost weightless - it almost does not feel in the hand. 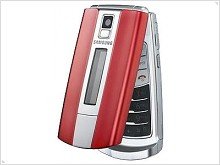 The upper panel of the phone - its main advantage, she looks spectacular in conjunction with any replacement panel. And all thanks to the original external display: it is long but very narrow and is located between the removable straps. Illumination of the screen, unfortunately, does not change its color - it has a purple hue on the background of which appear in the display data is visible only from a short distance. It is easier to see the time, signal strength or battery power with the backlight turned off.
Qualitatively implemented sliding mechanism - the device easy to open even with one hand. Luft halves of the body is minimal, almost imperceptible. System change faceplates as well thought out: the parts can easily fixed, but at the same time very tightly seated in the grooves and does not falter over time - you can enjoy the changing colors in the mood or weekdays, do not fear that once the panel is lost or broken. 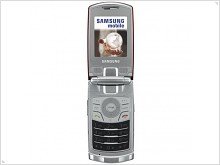 Inner panels are somewhat more modest. They are decorated except the original keyboard and speakers located below the display, and occupy about a quarter of the panel. Despite this, the screen has a considerable size - 176x220 pixels. It is really very nice and has a matrix with support for 65 thousand colors. The display is clearly visible in the bright sun, though losing some amount of brightness at different angles the picture also looks great. The keyboard of this phone - its weaknesses and strengths together. It looks great, but the qualitative aspect of a disappointment. The bottom panel of the housing Samsung E490 is very thin, the keys are a single plastic panel, which sags in some places and starts creaking. However, technical problems this causes, and affects only the aesthetic perception of the device.

A controversial point can also be called a shallow depth of the buttons and their sensitivity: sometimes one and the same key, you can accidentally click twice and did not even notice it, especially with respect to the navigation center. Illuminated keyboard white uniform, and quite bright. Additional buttons are located on the classical side faces. This is a rocker for volume control and quick access to the camera. The keys are the average response time and a very tight turn, a greater measure of it concerns buttons camera, which, incidentally, does not work if the terminal complex. 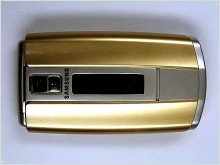 Software phone Samsung E490  is similar to recent models of the company. The main menu consists of nine chapters and can be displayed as icons or list. In the latter case, when selecting the desired fields on the right side of the screen opens drop-down submenus - a short list of items section.Move by using the navigation center. Just as in previous models, navigation and sorting menu items at its discretion in this apparatus are not possible.

In the address book holds up to thousands of subscribers, each can assign your own picture, ringtone, put it in a specific group. By the way, a single tone can be secured and a group of contacts, while if one subscriber assigned two tones (group and individual), if an incoming call shall prevail signal.Est personal speed dialing numbers, the maximum number is equal to eight, with the different buttons you can program different numbers of one and the same contact.

The memory device can store up to one hundred events of each of three types: a "meeting", "Anniversary", "job". For each record the date and time start and end events, as well as its venue. It is possible to set a reminder with an interval of operation. What can be seen for months and weeks. The phone is about twenty megabytes of internal memory, but if the gap can use the memory card microSDobemom up to one gigabyte. It is dynamically allocated for all types of files - pictures, videos, melodies and messages. For Java-based applications accessible only four megabytes - this is clearly not enough.

Despite the fact that technically the terminal is a little behind most of its competitors, it is accessible communication with other devices with Bluetooth and USB-cable. Connection via Bluetooth rather quickly, the file size of about two megabytes held for half a minute.Nevertheless, share large files this way is difficult, much easier to download them via a wired connection. In addition, the device is capable of playing rolUSB drive, providing data storage card. Access to the network through a built-in browser technology WAP 2.0, and the transfer of data - on GPRS or EDGE Class 10. If necessary, the phone can be used in kachestveUSB modem.

Opening hours - one of the strengths of Samsung E490. When the player he can hold about a half a day - unless, of course, do not play music continuously. In normal mode, the terminal will last for four or five days.

The sound in this model is displayed on the three dynamics. First, the main is located above the display and serves to transmit the audio during a phone conversation. The other two under the screen, are responsible for the ringtone, as well as play music player mode. Dynamics of average quality - despite the relatively high volume, they suffer hoarse notes and give the metal and the volume is close to the maximum. But when it is below average, the sound quality, loud and clear. When closed the dynamics are not adjacent to the bottom, so there is no significant mute.
Built-in music player plays tunes in MP3 and AAC, but does not work in the background.Supports the standard modes of listening: sequentially, in a loop or in random order. This list of songs you can create just one. To listen to the larger rooms have a mode of 3D-sound, which, however, has little effect on the sound. Several efficient equalizer - the majority of its preset substantially change the sound by adding a high or low frequencies.

The very same player has a graphical user interface with visualization and recording on tape you can see the amplitude of sound vibrations in the form of graphics. Unfortunately, the record has a very mediocre quality, in normal conditions (low noise) and sound recorder normally writes only at a distance of one meter, while on the record still hear background noise. Its duration is limited to one hour, as well as space on a map or in the phone memory. 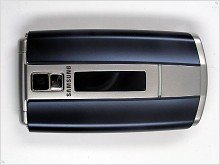 Built-in 1.3 megapixel camera lets you take pictures without applying for a special quality.Maximum resolution photo is 1280x1024 pixels. Autofocus works poorly, not only in low light or in traffic, but also in normal conditions. Daily sunshine helps smooth colors in the photographs, and room lighting leads to the dominance of yellow shades, even the gloomy weather can significantly damage the frames. On shooting at night or evening hours can be no question - no built-in flash.

Of the additional modes available a standard set of color effects and frames whatsoever, except for a single photo camera allows serial and matrix shooting. In addition to photos, can record movies, though they look very modestly - to carry on their computer, certainly not worth it.Video is recorded in a format 3gp, maximum frame size - 176x144 pixels. Clip get antsy, uneven, when you use the zoom sail not only facilities but also the colors. 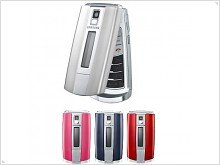 Conclusion: Despite the many technical flaws, the phone quite well. The combination of beautiful appearance and built-in player with good sound - what you need for many users. In addition, the device provides an opportunity to change the panel, creating your own unique style.It is possible that soon the company will release additional sets panelek that will spur users to buy the terminal. The model is consistent with the stated price, but apart from a nice-looking virtually nothing stands out from the competition.

Source: ®  with the assistance media.mabila.ua